Annual Edinburgh Meeting of the Registry of Scots Nobility

Next year’s meeting will place at the New Club, Princes Street, Edinburgh at 10.00 a.m. on Monday 18th of September, 2023.  All those on the Registry (Peerage, Baronetage and Baronage) are most welcome to attend.  The theme next year will center on the modern uses of Scots Barony. We will discuss the role in the past of a Baron’s Baily and a Baron’s Court, and also the connection between the Barony and the traditional area from which the Barony was sourced.  Although, Baronies are no longer attached to land in the same way, a Baron can none the less play a significant role.

Speakers will include: Members of the Peerage and Baronage, Solicitors involved in the legal aspects of inheritance and titles, and an Heraldic artist who will speak on the preparation of Coats of Arms.   Barons who are qualified and bring evidence (Certificate from the Scottish Baron Registry or details of Coat of Arms) will be able to acquire the specific Barons Jewel to their Barony, each jewel (similar to the Scottish Baronets neck badge) is numbered.  As with previous years, Members of the Scots Registry of Nobility who attend in person may receive a Certificate of Membership of the Registry, that would be presented by the Chair of the Committee of Review, the Earl of Loudoun (if you wish to receive a certificate it is necessary to contact the Chancellor at least two weeks prior to the meeting).  There is no cost for those members in attendance at the Annual Meeting of the Registry.

Due to the pandemic restrictions it was not possible to hold the 200th Anniversary of the Peers Ball as originally planned.  However, the Edinburgh Council would like us to continue with our original plan for the plaque to be unveiled at the Assembly Rooms.  We will discuss this further at the 2023 meeting as it is particularly important to get the correct wording for this historic plaque.

It is also intended to hold an Assembly of Scots Nobility approximately every five years in the tradition of the Scots Nobility prior to the Act of Union. Many of the attributes of Scots Nobility have no present outlet. For example, the Barons Mantle has rarely been worn since the demise of the Scots parliament. Similarly, the opportunity for a purely Scottish gathering of nobility including the Scots Barons has not presented itself for several centuries. This assembly would also recognize the inherent nobility of Clan Chiefs and similar individuals.

REPORT ON THE 2022 ANNUAL MEETING

Due to the funeral of Her Majesty Queen Elizabeth II, it was necessary to move the date of the Annual Meeting from Monday the 19th to Tuesday the 20th of September, 2022.  Unfortunately, this meant that many members of the Registry both Barons and Members of the Peerage and Baronetage could not attend.  This was particularly unfortunate as we were launching the Scottish Baron’s Jewel on this occasion.  There is an attachment to this Report with details on how a Baron’s Jewel can be obtained.  We have also had enquiries from members of the scottish Peerage, and providing they also possess a Barony, and many do, they are most welcome to apply.  As is the case with all Barons it is necessary to establish the legitimacy of the Barony and proof that the Peer/Baron holds the Barony.

At the 2022 meeting we were fortunate to have Mr Michael Yellowlees as our main speaker and he was able to discuss at some length many of the legal arrangements effecting Scottish Baronies.  Of particular interest was a discussion on the use of the title and the conventions relating to its use.  Some Barons have queried whether it is necessary to be the “Baron of So and So” , when they would prefer to be known as “Baron So and So”.  The use of “of” , fulfills the same role as “von” in German Baronies or “de” in French Baronies.  It is important to retain the “of” in Scottish Baronies so that the distinction is made with U.K. Peerage Baronies.  If a Baron insists on not using the “of”, then it is felt vital to also add “Scots Barony” or the very least “scot” as in “Baron So and So” scot.

We look forward to as many members of the Registry as possible attending the meeting in 2023 and regret the necessity to change this year’s date. 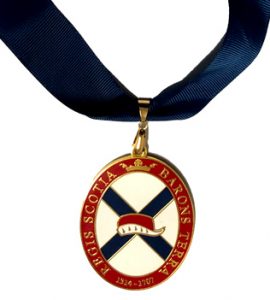 The new Scottish Baron’s Jewel, the first available to Barons since the Act of Union in 1707, has been designed and issued by the Registry of Scots Nobility in Edinburgh. The Registry has produced three hundred of the Baron’s jewels which are numbered from 1 to 300, each one will be dedicated to one Barony.  (300 is the number of the known Scottish Baronies.)

The Scottish Baron’s Jewel is similar to the Scottish Baronet’s Badge in that it features the Cross of St Andrew and is encircled in an extract in Old Scots Latin from the Great Seal of Scotland.  The jewel itself is made of bronze alloy and incorporates copper sourced from the handle of a Scottish broad sword known to have been used in the Wars of Independence and the Battle of Bannockburn.  The jewel hangs from a 9ct gold bail and features a royal blue ribbon of medal satin.

The jewel is available to all Scottish Barons who can establish the that their Barony is genuine and that they are certified as the Baron.  They will need to include a copy of their entry in the Scottish Baron’s register or details of their Coat of Arms as registered with the Lord Lyon.

There is a single price of £50 to cover the costs relating to the development of the jewel and also such costs as postage, insurance and administration.  If you can fulfil the requirements and you would like to have the use of the Baron’s jewel for your lifetime, fill out the application below.

Copy of Coat of Arms: Yes/No

will be forwarded once entitlement

to the Baron’s Jewel is established.